Cats can be very sassy so I thought that picture was an accurate description of how a cat would act.

Felis catus (cats) are very interesting creatures. They’re the only domesticated animal that a lot of people will let freely roam. Have you ever wondered where your cat went? Do they go far from home? Do they stay in the neighborhood? What about all those times where your cat brought you back a “present”? Where did they get it? Did Ms. FluffyPants stay in an urban area? Did Mr. PussInBoots go out in the woods?

People were given the opportunity to find out! Using radio telemetry, scientists and the cat’s owners were able to track their cat’s home range or area. In this lab, we used Google Earth Pro, MoveBank.org, and EarthPoint. MoveBank gave us all the data we needed for each country we looked at (USA, Australia, and New Zealand). MoveBank would then direct us to Google Earth Pro to look at the area visually. After the home range was found, we would copy and paste a computer code into EarthPoint; a program that uses the polygon given to spit out an area in hectares. For every country, we would record 15 cats. So in total, we recorded the home range for 45 cats.

Knowing general information about these countries, it was interesting to guess which location would have the most “urban” or “rural” cats. I personally guessed that the USA would have the highest average home range but would still stay pretty urban. I guessed that Australia and New Zealand would have more rural cats but wouldn’t go very far since the terrain might be a little more dangerous for the average house cat.

Let’s look at the results!

We first found the average area for each country. We then applied it into a bar graph.

As you can see from the bar graph above, my prediction seems to be right about the average home range. The USA seemed to average out higher than Australia and New Zealand, but the error bars still need to be taken into consideration. All of them are overlapping so it does not necessarily mean that the USA had a higher average than the rest. So is it statistically significant? We used the Anova single factor test to find out.

As you can see from above, the p-value is way above 0.05. Therefore, the data is not significant. If we had a way bigger data set, maybe we would have gotten different results. As for these 45 cats, the home ranges in different countries are not significant enough to compare.

Based off of Google Earth Pro, most of the USA cats stayed very urban but would go out farther than the others. In Australia, the cats seemed to go into more rural areas, but not enough to be very noticeable. They still seemed to stay relatively close to all the neighborhoods. New Zealand, however, was the most rural of all three. If a house was near the woods or a mountain, I noticed the cat would either go inside the forested area or outline the side of the mountain to a certain extent. Some even seemed to be climbing the mountain, but none went very far.

Overall, most of the cats in all three countries stayed in an urban environment. This seems pretty natural to me if the cat is used to being both indoor and outdoor. The cat knows it doesn’t need to go very far from home if it being fed by its owners. Even though a lot of the cat’s actions are instinctual, a part of it might just simply be curiosity rather than the need to survive.

Some abiotic factors that could potentially affect a cat’s home range includes: buildings, roads, houses, etc. Biotic factors could also influence a cat’s home range. This can include other cats and other animals in general. Cats tend to be very territorial, thus possibly limiting a cat’s potential area if come in contact with another cat. Though most cats are probably used to being surrounded by roads, houses, and other buildings, they still know when something is dangerous to them, therefore they tend to avoid roads, thus also limiting their home range. However, breeding season should also be kept into consideration. Though I do not have information on the cat’s sex, I would assume males traveled farther than females in order to mate.

Cats have become a very common pet for people to have. Though a lot of people have confined their cats to being indoor only (which can be a very good thing), a lot of people still let their cats roam free. Is this damaging to the environment? YES.

Although it does not cross a lot of peoples’ minds, outdoor cats HEAVILY influence the environment. According to a peer reviewed article called The impact of free-ranging domestic cats on wildlife in the United States, the authors claim that 1.4 – 3.7 billion birds and 6.9 – 20.7 billion mammals are killed by cats annually. However, the majority of these killings were done by feral cats as opposed to owned cats. Nonetheless, domestic cats are said to have contributed to 14% of the bird, mammal, and reptile extinctions. I knew that cats could have an impact on the environment, but I personally would have never guessed how big of an influence they had. If I compare my results to this study, I have a hard time proving anything. Since I simply looked at the home range and not the actual footage from the cameras attached to the cat, it’s impossible to tell if the cat had an ecological influence. However, if I had footage of all 45 cats, I could tell you how many of them were hunting for prey.

I’ve always wanted a cat… I’m pretty sure I’ll keep it inside if I ever get one now. Of course, there will always be people advocating for the other side. Understandably, a lot of people want to let their cats roam free because it’s sad to think of an animal being confined for its entire life. The best advice I could give is simply to fix (neuter or spay) your cat, no matter what.

If I had to think of something that would please both cats and the local environment, I would build what some shelters even have today. Some people call them “catios”. It’s like a patio, but for your cat! 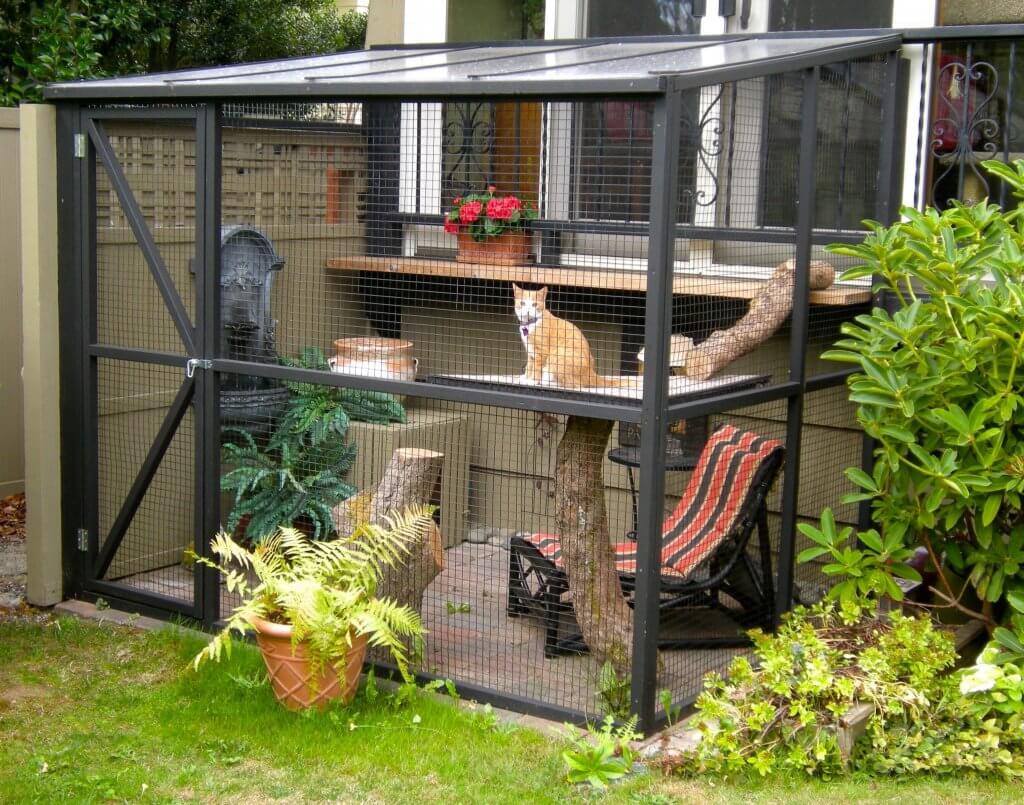 There are so many advantages to this!

Though theres clearly a big con… Money. This looks quite expensive. Maybe you could make it a project to make one out of wood?

In summary, cats are very curious creatures that are invasive. It is our job to protect the environment as much as we can. This includes taking care and controlling our pets. The first thing everyone should do if adopting a pet is to neuter or spay. Maybe one day, cats wouldn’t be considered invasive. Following cats around a natural environment is a good way to research their habits.

Hope you guys enjoyed this weeks blog! See you next week!