(Joke by The Barn Owl Trust)

Welcome back! Did you like the joke? I liked the joke, sorrynotsorry.

In this week’s blog, we’ll be talking all about a Barn owl’s diet and food webs!

First of all, look at this majestic creature!

Barn Owls are fascinating creatures. They are nocturnal apex predators and are excellent hunters due to them being almost completely silent when flying. For most birds, the air turbulence caused by flying creates sound. For the majority of birds, the bigger they are, the more sound they make. However, Barn Owls, and Owls in general, are different. According to Krista Le Piane, a graduate student at the University of California, explains that “owls have a suite of unique wing and feather features that enable them to reduce locomotion-induced sound”. We could get way more specific about this and frankly write a whole blog, but this isn’t the main point for this week.

Barn Owls give researchers a good indication of other organisms in a habitat by their diet. Like the joke above said, Barn Owls mostly eat shrews, voles, and mice. Of course, they’re not that picky and will also eat rats, moles, gophers, small birds, reptiles, amphibians, etc. However, if a habitat is thriving, they are more likely to eat rodents. They will eat reptiles and amphibians if needed, but it’s usually not their first choice of food.

If you look at a food web (for a Barn Owl), which is basically a bunch of interlocking food chains put together, you get this: 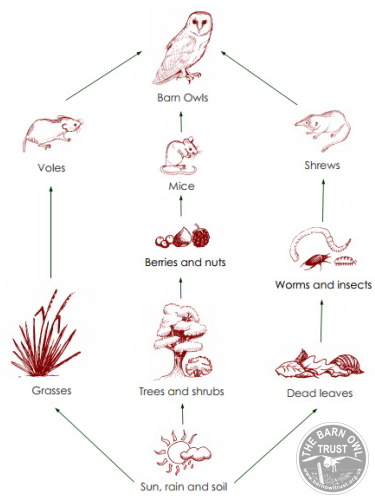 Photo by The Barn Owl Trust

When Barn Owls eat their food, they cant digest everything. Like most birds, they simply swallow their prey whole and let their organs do the rest of the work. In the Barn Owl’s case, their gizzard processes what is consumable and stores the rest of it away for later excretion through the form of a pellet which they throw back up. The pellets usually contain skulls, teeth, other bones, claws, fur, and feathers.

In the lab, we dissected owl pellets to see what we were able to find! We kept track of approximately what bones we found and also based on the bones and skull, what prey the owl may have eaten. Based off of this data, we were also able to give a rough estimate of what region the owl could’ve been in.

I personally had two pellets but some other people in my class only had one if their pellet was relatively big. Here were my personal results!

As you can tell, ribs were the most common bone found in the pellets. This seems pretty normal to me considering there are about 13 pairs of ribs (at least in mice) in each animal the Barn Owl eats. I naturally expected the ribs to be the most common found bone. In my two pellets, I found 4 skulls. 3 of these 4 skulls seemed to be from some sort of rodent (I think one was a rat based off the size), whereas the one remaining skull seemed to maybe be a Shrew.

Based off of the prey, I guessed that the pellets were from the Southwest, but that’s a very rough estimate. I don’t think I had enough experience or education to make an accurate guess. This would mean the habitat was dry, but I’m not so sure that correctly matches up with the prey found. Things that could help identifying a more specific area would be knowing the specific type of prey and its species. I also found hay in my pellets, so maybe identifying the specific type of grass would help? I’m not quite sure.

Not surprisingly, the class of 2017 also found the ribs to be the most abundant bone found. As for the prey found, rodents were also the most common. Not a surprise there. Shrews were the second most common. Again, not a surprise.

This result is a little more interesting! Even though the ribs remain the top find, the number of hindlimbs found is not far behind. What’s even more interesting in my opinion was the prey found. Of course, rodents take the lead, but I did not expect the mole to be the second contender. What’s even more surprising to me is how close the percentages are between the shrews and the birds! I did not find any birds in my pellets so it’s fascinating to see the results that other people got.

In everyone’s results, amphibians, reptiles, and insects seem to be missing from the Barn Owl’s diet. However, this could simply be due to the fact that none of us were professional dissectors by any means. A lot of bones were broken when trying to gently tear apart the pellet. Also, we might’ve completely skipped over a crucial bone that indicated a reptile or amphibian. As for insects, they don’t have bones and therefore make it way more difficult to find remains in compressed owl pellets.

In both of my pellets, I found a total of 4 intact skulls. This means that the Barn Owl ate at least 4 animals in a matter of two days if we assume that the owl forms one pellet each day. However, I think we can estimate a higher number of prey in each pellet due to the sheer number of bones found. I will assume there were 6 animal in both of my pellets. So let’s do the math:

1084 animals for ONE Barn Owl! And i’m probably underestimating how good of hunter’s they actually are.

According to the Alabama Wildbird Conservation Association, Barn Owls actually eat up to 6 voles or vole sized rodents every night. This doubles our estimated numbers! This amount of food usually totals 1/3 of their body weight!

Since we’ve talked about Urban Ecology before on this blog, I feel like it’s important to mention the differences between a Barn Owl in a rural habitat compared to a Barn Owl near or in an Urban environment. Remember the bear studies with the restaurant dumpsters? And the coyotes living primarily in cities? This is a similar concept. According to a Peer Reviewed article called A Specialist in the City: The Diet of Barn Owls Along a Rural to Urban Gradient by Sofi Hindmarch and John E. Elliott, they observed that “The proportion of rats consumed increased significantly with the amount of urbanization within home ranges. However, voles (primarily field voles, Microtus townsendii) were the main prey item for all sites irrespective of surrounding land use within home ranges. Shrews were the second most consumed prey species (10.8±8 %), and were found predominantly in the diet of barn owls nesting in more rural landscapes”.

Like the bears and coyotes, the Barn Owl’s diet changed. Maybe it wasn’t as significant as the bears, but it was a change nonetheless. While rats are still common in a Barn Owl’s normal diet, the results showed a higher consumption of rats in Barn Owl’s that live in or near urban environments. Everyone knows that rats are very common in cities due to all the food easily accessible nearly all the time. Why wouldn’t owls want to grab easy prey? However, like every species abundant in urban environments, it can cause problems for the species. Rats do transfer more diseases than mice or other small rodents. This could cause an increase in sickness among Barn Owls. Along with diseases, there’s an increase in potential danger towards Barn Owls in Urban environments. Cars are everywhere. Though Barn Owls are apex predators, cars beat all. Windows can also cause a problem, believe it or not. Overall, it’s probably best that Barn Owl’s stay on farms of some sort. It benefits the farmers by getting rid of rodents that eat their crops and it feeds the Barn Owls. The Barn Owls even use barns as a place for shelter and nesting. It’s a win-win for all.

Now that we know that Barn Owl’s help control the amount of rodents and other small mammals on this Earth, are there any other animals that have a great impact in the food web? Uh, YES. Spiders are one of the best examples. Though spiders may be scary to some, I assure you, you’d probably miss them if they were gone.

According to an article called Spiders eat astronomical numbers of insects, spiders are found in 7 biomes around the world and kill between 400 and 800 million tons of prey each year! Their significance in food webs around the world is immense. This means that spiders are integrated almost everywhere. More specifically, they are heavily integrated in grasslands, forests, and savannas. This is due to the fact that these areas are less frequently disturbed than other areas like the city, for example. The abundance of chemicals and human control over the population of spiders in the city or any urban environment, greatly effects the concentration of spiders.

If spiders were to disappear, that would be a big issue… Pests would get out of control and we would actually lose valuable resources. According to a peer reviewed article called Why Study Spiders? Our Suggested Websites Will Give You Plenty of Reasons by M. O. Thirunamyanan, some spiders actually produce silk which “is an extremely strong material and is on [a] weight basis stronger than steel … [which] is likely to have many commercial applications”. So as much as you may hate spiders, I’m sure you’ll dislike the amount of another pests more.

In summary, Barn Owls, spiders, and everything in between is very important to the environment. Every living this is linked together in one way or another. Without Barn Owls, we would have a greater infestation of rodents and small mammals. Without spiders, we would be overrun with all sorts of pests. With the extinction or great threat of every species, there comes a consequence. Food webs are like puzzles. With one piece of the puzzle removed, there comes a problem.

I hope you guys enjoyed this week’s blog! Until next time!

Thirunamyanan, M. O. “Science Education Resources on the Web—Spiders: Why Study Spiders? Our Suggested Web Sites Will Give You Plenty of Reasons.” Journal of College Science Teaching, vol. 27, no. 2, 1997, pp. 90–91.